Reflecting on Gender: Why the USA Women’s Soccer Team Should Celebrate Their Own Way

You are here:
sports 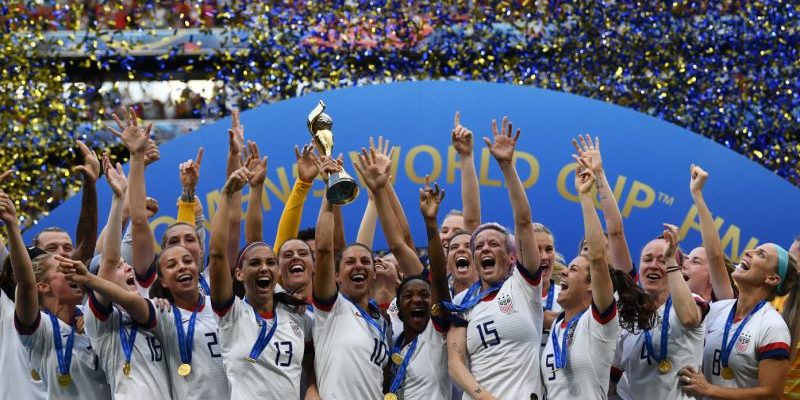 Fancy a cup of tea? Why not, if you are beating England in the World Cup Semi-Final. Should women celebrate if they score 5th, 10th or 13th goals? Should women be conforming to SportsMANship and ‘act like they’ve been there before?’ Or better yet, should they be “Humble in victory and gracious in defeat?”

I say no. Forge your own path. Decide your own destiny. Celebrate and express yourself while you play as if you were not beholden to men. Because most men have done women few favors over time as women and girls made inroads into sport.

After all – why follow what men suggest as “appropriate behavior” when historically men have not wanted you to play sports in our Western societies.

Yes, the same men will willingly chastise you for celebration after goals or critique your overall demeanor, or hair, or makeup or nearly everything else they put under their microscopes. Criticism of athletes is not wrong. Telling women they should ‘behave like men,’ is.

Women succeeding at sports and forging new paths for our entertainment pleasure is something most men, pre-Title IX (1972), would not have wanted to see. 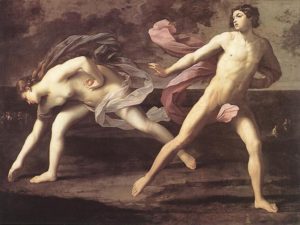 The ancient Greeks barely allowed women to compete in the Olympics – naked and as virgins – in limited events.  Men competed naked also but were not held to the “virgin” standard. Further, women were not even allowed to view male Olympic competition in ancient times. The modern Olympic movement began in 1896, but even then, Pierre de Coubertin, the father of the modern Olympics was certain that women should not be allowed to participate. (1)

Why? Because sport was thought of as the domain of men and masculinity. At the turn of the 20th Century all over the USA, fathers and mothers were enrolling their boys into sports programs. It was thought that the industrial revolution “softened” boys because big city life meant no farm or manual labor. Spending time at home in the kitchen with mom after school was thought to “feminize” boys.

This brought on many leagues in cities (church leagues, YMCA) where boys could toughen-up by playing sports, primarily football, basketball and baseball. The idea was that sport made one more masculine. Why would we want to make my daughters masculine? That argument stole sport from many women for years.

How about this revised reason for playing sport: Sport can make one fitter, stronger, and more competitive . . . regardless of gender. 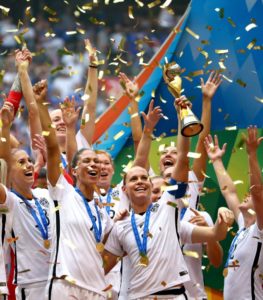 As equaling as that might sound, women still have more work to do. FIFA will award $30 million in prize money for the Women’s World Cup. They have proposed to double that payout by the next World Cup. Sounds nice, right?

The men, turns out, got $400 million last year for their World Cup payout. They are proposed to get $440 next time. Thus, the TOTAL amount of money the Women receive this year doesn’t even beat the cost of living increase for the men in the next world cup! Let that sink in.

Moments after the final whistle of the 2-0 win over the Netherlands, a spokesperson for the U.S. Women’s players association released statement, which put forth proof that men’s and women’s teams should be paid equally:

“At this moment of tremendous pride for America, the sad equation remains all too clear  . . . The athletes generate more revenue and garner higher TV ratings, but get paid less simply because they are women. It is time for the federation to correct this disparity once and for all.” (2)

Men also have had much to say about that infamous soccer match in the 2019 World Cup where the women beat Thailand, 13-0. The general sentiment was the same for women as it was for African American men as team sport in the USA integrated: “You [women] should act like they’ve been there before.” (3)

Here’s a thought: What if women have not been allowed to compete in sports historically and want to therefore experience the joy and go wild and act as crazy as they want? In spite of degrading commentary from men? 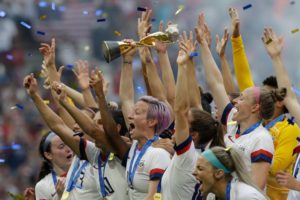 What if women made their own codes of conduct based upon how they see the world and experience competition? What if they developed their own players’ code that spread over soccer and into other women’s sport and eventually women competed and celebrated differently from the men?

Would a different way of behaving be wrong? Of course not. Men need to learn from women how to play sport without as much testosterone and fighting. Show men you can adeptly integrate straight and lesbian women and become champions while the men shove out anyone who might be gay. Men have to learn how to play with gay men with no drama on professional team sports in America. Like the women. So, men have a lot to learn from women.

And women, do not listen to the men who tell you how to behave. Follow your own voices, your own hearts, and develop your own personal codes for conduct. You have a true joy of playing because you earned it and are not bound like men to the idea of an entitlement to kick ass in sport.

So, keep kicking ass, women. Your way. Congrats on your back-to-back World Championships.

1 Mechikoff, R. 2014. A History and Philosophy of Sport and Physical Education: From Ancient Civilizations to the Modern World. New York: McGraw-Hill.

Dr. Vernon Andrews is a Sports Sociologist teaching at California State University, Chico. He is author of an upcoming book highlighting the history of celebration and protest in sports.

Act Like You’ve Been There Before: The Age-Old White Taunt of White Privilege
September 12, 2020

The Ripple Effect of Colin Kaepernick Within and Beyond the NFL
September 12, 2020