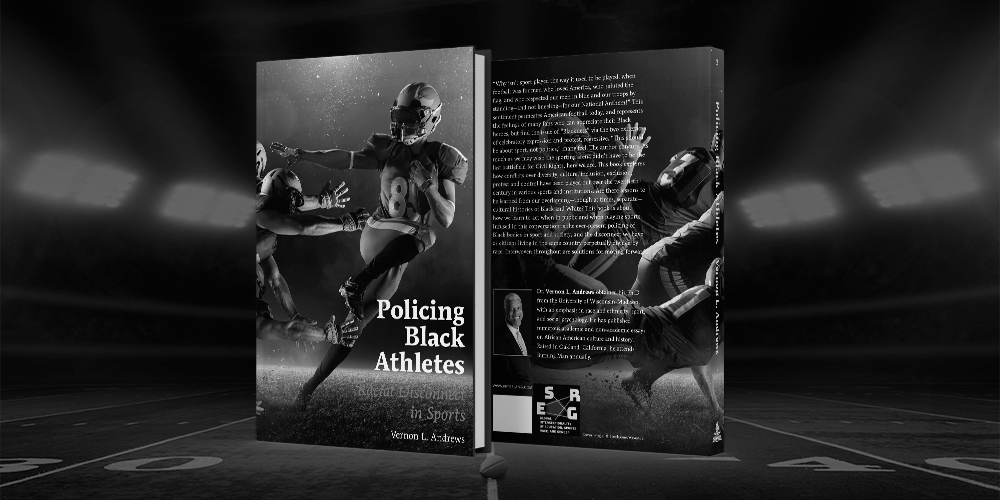 SAN FRANCISCO – With one act of silent protest, Colin Kaepernick shattered the invisible contract between Black players and white fans across the nation—an agreement in which Black players “act like they’ve been there before” — but what if they haven’t? What if touchdown celebrations are all about traditional Black expression and never about unsportsmanlike conduct? And what if Kaepernick’s kneeling during the anthem had nothing to do with disrespecting the flag or the country, but everything to do with being a Black man in America calling for racial justice in the most peaceful and profound way he knew how? It’s time we understood why both acts are deemed so offensive to White America.

In “Policing Black Athletes: Racial Disconnect in Sports,” Dr. Vernon L. Andrews takes readers on a fascinating journey through Black and White cultures in America, exploring ways they have overlapped and remained separate throughout generations, and how they have unmistakably collided on sports fields. He cracks the veneer of Black behavior on the field and in society, when their bodies are judged and “policed” — all with the goal of finding ways forward in a country still reeling from the tragic killings of George Floyd, Breonna Taylor, and so many more unarmed Black Americans.

“What is interpreted as arrogance by Black athletes (by not acting like they’ve been there) is often the reverse — a flourish of happiness in the face of humble origins,” explains Andrews early on in the book.

Andrews obtained his Ph.D from the University of Wisconsin-Madison, with an emphasis in race and ethnicity, sport, and social psychology. His decade-long research for “Policing Black Athletes” has resulted in a comprehensive and compelling look at how the sporting arena has become one of the last battlefields for Civil Rights. Written as an academic book with a message for mainstream America, “Policing Black Athletes” is the missing link in our national discourse on diversity, culture, inclusion, exclusion, protest, and societal rules over Black America.

How To Be Born Black, Run From Police And Live To Write About It
September 12, 2020

Act Like You’ve Been There Before: The Age-Old White Taunt of White Privilege
September 12, 2020
Go to Top