Act Like You’ve Been There Before: The Age-Old White Taunt of White Privilege

You are here:
Race and Culturesports 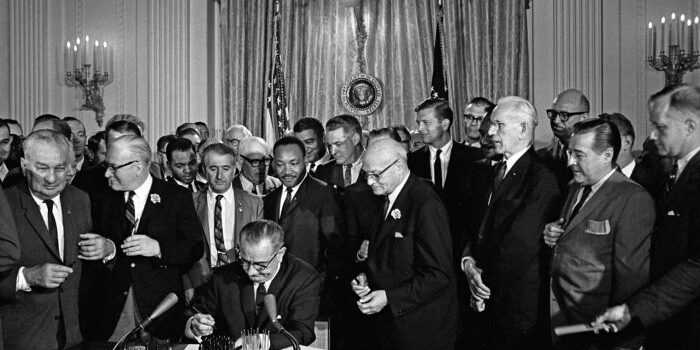 I’d prefer not calling it White Privilege, because I’m Black — and I want it too. But funny, regardless of how much I “act” American, I still can’t seem to get enough college degrees (4, and counting) to purchase me some privilege. How did we get here?

I’m dropping an excerpt from my forthcoming book, “Policing Black Athletes: Racial Disconnect in Sports” (Peter Lang Publishers) that lays out how Black Americans are told to behave like White people — like privilege is our birthright — so that we won’t be penalized in society (or after scoring a touchdown).

Basically, it’s like this: “You just scored a touchdown young man — calm the hell down!”

Until the signing of the Civil Rights Act in 1965, Black Americans could face severe hardship if they otherwise “stood up” to or “celebrated” in or around whites. For someone under the age of forty, 1965 is a long time ago.

But in the context of American history, this represents one generation of celebratory expression and/or unimpeded social freedom. In a broader historical sense, African Americans have not “been there” and “done that” before.

Think about that. Freedom for White males in 1776, and freedom for White women to vote in 1920, and freedom and legalized voting rights for the rest of us in 1965. Most White minds are not able to comprehend an America where they would have experienced so little access to freedom. But if you are White and reading this, I want you to imagine that.

Now I would like you to spend one day acting like you have not had freedom since 1776, but, rather, since 1965. Better yet, pretend this is pre-1965 America. Look no White person in the eye. Open doors and show uncommon respect for even the most unworthy of White people. Pretend White people are your God-given masters and you are not worthy of their respect.

Act like you’ve been there before. That smell? That’s the stench of Jim Crow.

What to make of Black Expression

The brilliant White social commentator Tim Wise, in an article titled “Whites Swim in Racial Preference,” summarized the effect of living in so much privilege that it is not even recognizable:

Ask a fish what water is and you’ll get no answer. Even if fish were capable of speech, they would likely have no explanation for the element they swim in every minute of every day of their lives. Water simply is. Fish take it for granted. (1)

I would love to take freedom for granted. Success for granted. Walking unfettered through a downtown department store for granted. But I know better. I don’t assume success is something normal for Black people. I wish it were. We are getting closer by our sheer will, but there is much work to do.

Someone summed up the privilege many get at birth in America with a sports analogy about George W. Bush getting into Yale University, dodging Vietnam, becoming part-owner of the Texas Rangers baseball team, becoming Texas Governor, and eventually becoming a two-term president:

George W. Bush was born on third base — but he wakes up every morning thinking he hit a triple. [I actually have a soft spot for “W” as he and Michelle Obama have a kind, flirtatious friendship that showed up in public at George Bush senior’s funeral. George W. Bush handed Michelle a piece of wrapped candy as his way of showing her affection. Say what you will, but that makes him very human and forgiving and kind.]

American Whites (I don’t mean you, and I don’t mean everybody else White; you know who you are) take for granted imbedded social privileges so much so that many cannot conceive that others are not born into such “water.”

But for many Black, brown, Asian, Q+, women, differently abled, and poor/conscious Whites, social meritocracy and physical freedom are as alien to us as a fish would feel walking through Oakland. Black Americans are finally experiencing (since 1965) the emotion of group success.

Some will argue that there is a long line of successful athletes and entertainers in Black American history, which shows everyone and anyone can pull themselves up. I agree.

Yet only a fraction of African American individuals with “success narratives” were ever allowed to eat, drink, or sleep in the White hotels (pre-1965) across the country. So, we’ve only “kinda” been there before, like people inhaling second-hand smoke through the cracks in a door. So close to the real thing we could taste it.

Yes, even while succeeding, that “question mark” of equality hovered over our heads. Indeed, one jazz drummer, Panama Francis, summed up his experience of being a Black performer in the face of White privilege in chilling detail. This interaction recalls that public display of emotion was the height of White privilege while control of emotions led to the identity theft of Black culture:

Hiding one’s feelings under the grinning black mask was a survival skill of great importance to all black males up though World War II; a black man could get lynched for pretending to be on equal terms with a white man under almost any circumstances. Drummer Panama Francis remembered a man who used to come see his band every week in his Florida hometown and every week put a hole in his bass drum. The man always gave him five dollars to fix it, but the drummer hated the ritual humiliation. “I used to get so mad, but I had to smile because back in those days, you had better smile, so I smiled; but I didn’t like it too well.” At the time, black sociologist Charles S. Johnson called emotional masking “accommodation” to white expectations; in the vernacular it was known as “Tomming.” (2)

I’ve “Tommed” before, and it can hurt. Not always. But small acts of behavioral compliance can steal a tiny bit of your soul. I did what I had to do to get by. This way of going about life in America is the equivalent of eternally pledging a fraternity or sorority — and never being allowed to join.

The “act” of having to enjoy your own ritual humiliation was part and parcel of the African American experience in the face of Whiteness and White privilege, whether your profession was jazz, or your name was Jackie Robinson, former Black baseball great for the Brooklyn Dodgers.

“Freedom and equality,” while bandied about in White circles as the American creed and high-minded ideology, was merely a “taunt” in the face of African Americans who could not see freedom of expression in their own lives, feel equality with their own hands, or taste individuality and identity in their consciousness.

A White researcher from Sweden, Gunner Myrdal, was fascinated by the contradiction between White privilege and American ideals and what he saw as the blatant, racist treatment of Black Americans — from athletes and entertainers, to common everyday Black folk in everyday places and spaces.

He edited an award-winning (and history-changing) book entitled An American Dilemma, which sought to identify ruptures in the American Creed across the USA in Black institutions and lives. (3)

Though An American Dilemma was used to help defeat racial segregation in the 1954 Supreme Court case of Brown vs. Board of Education, Blacks saw the book itself as telling them something they already knew — they had few social rights compared to Whites.

African Americans could not enjoy those rights and privileges accorded to Whites; even the ability to verbally contest your own subjugation was denied.

Verbal defiance in the face of ill treatment in America — or freedom of speech, as it has been called — was not a privilege enjoyed throughout the Black community.

Indeed, many Whites looked at Black protest — even in its nonviolent form — as the cause of the problem of civic violence aimed at Blacks. Ain’t that something?

Case in point: Many Black athletes who locked arms, or kneeled, or raised a black fist in silent protest during national anthems all across America from 2016–2020 were seen as the “real problem.”

This is akin to how sports commentators and coaches often view Black celebratory expression in sport as the problem, rather than the physical aggression that sometimes happens as a result of Black expression. Like tossing your bat up after a great home run, then having the pitcher throw a ball at your head.

White sports aggression is implicitly condoned (“he had it coming”), while celebration is in many cases penalized and vilified. (4)

Nineteen-sixties radical Stokely Carmichael commented on Black social expression/aggression and The American Dilemma in the context of discussing the behavior of American Whites with institutionalized racist values:

What we have discovered, in short, is that all of the United States is racist to the extent and the degree that we have refused to admit…much less face the tragedy of race in the United States…The tragedy…that in the United States there is no American Dilemma. White Americans are not torn and tortured by the conflict between their devotion to the American Creed and their actual behavior. They are upset…to be sure. But what troubles them is not that justice is denied but that the peace is being shattered… (5)

I’d like there to be more peace. We all would. In sports and in society. When we all have privilege, America will be whole — and live out her true destiny.

2. Dinerstein, 1998, p. 245. In a personal memo from Helen Gibson, she points up the pervasiveness of whiteness even to black Americans. She notes that: “Drummer Panama Francis remembered a man who used…….” A common critique is made about the invisibility of whiteness in whites’ language i.e. the common practice that “whiteness” is never claimed/named by those who identify as white but taken as the universal man. [This] example highlights that this is also common in the discourse of those who identify as African American and can be argued as an indication of the relentless power of whiteness to remain unnamed.

4. Many womanists and feminists will note the similarities to another justification of physical aggression –rape. If you dress or act a certain way, somehow it justifies acts of aggression towards you. Similarly, when black athletes express and are subsequently attacked, the idea is “He had it coming.”

How To Be Born Black, Run From Police And Live To Write About It
September 12, 2020
Go to Top