The Ripple Effect of Colin Kaepernick Within and Beyond the NFL

You are here:
Race and Culturesports 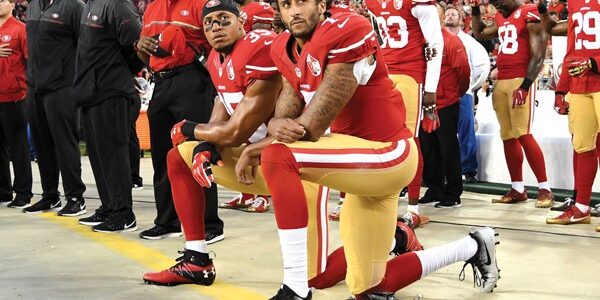 As we approach the September start of the NFL I’ve been wondering how players will protest, if at all. I’m guessing yes. Both basketball and baseball have come back strong with Black Lives Matter patches, emblems and commercials. Given that this movement for equality started with football, we should expect to see protests of some sort. Here’s your review of what happened when Colin Kaepernick decided to shake up the world.And the internet.

Of course, there are always Haters: A review of Twitter commentary

There are many venues where people voice dissent about anything and everything: Facebook, newspaper letters-to-the-editor, talk radio, and Twitter. I’ve assembled commentary from 2017–2020 on Twitter that are strongly against athlete protests.

While I don’t agree with these citizens, nor their logic, it is instructive to know how dissenters view athlete activism, patriotism and love of country, and issues of police brutality being debated.

Rarely does any dissenter comment on the social issue at hand — the multiple wrongful death shootings of civilians by “afraid for their lives” officers. There seems to be a conspiracy to avoid an honest discussion of very present issues.

This is in keeping with historical protests of African Americans that mostly have been met with, “This is not the place, and this is not the time.” I am conscious that though I might not agree with the below commentary, I don’t want to invalidate their concerns for our country.

I do understand their emotions, their fears and their devout patriotism. Which is why I feel it is important to voice their views. I have edited their commentary for clarity and ease of reading, not a usual custom in quoting individuals. But in this case, I want to privilege the central thought without evaluating any errors in communication.

I don’t want you to judge them — I want you to hear them. I’d want the same courtesy in an extended commentary about why police brutality rings true for many African Americans.

The anti-athlete/anti-free speech commentary fall under five general categories. Athletes are considered, 1) Anti-American, 2) Anti-Veteran, 3) Anti-Police, and also, 4) Politics don’t belong in sport, and 5) America — Love it or leave it. Get ready, because the haters will be out again this fall.

Protesting Athletes should Love America — or leave it!

Celebrities Weigh in on Activism

This is America. Which means we are opinionated. And Hollywood is no exception, with movie stars and popular singers and performers weighing in on the controversy in society as voiced by athlete activism. Here is a smattering of pro-activist comments by some you’ll easily know, and others you don’t.

Ava DuVernay: I will not be a spectator, viewer or supporter of the #SuperBowl today in protest of the @NFL’s racist treatment of @Kaepernick7 and its ongoing disregard for the health + well-being of all of its players. To watch the game is to compromise my beliefs. It’s not worth it. #ImWithKap.

Cardi B: Colin Kaepernick, as long as you kneel with us, we’re gonna be standing for you, baby. That’s right, I said it [at the 2017 MTV Video Music Awards].

Jay-Z: “I said no to the Super Bowl/You need me, I don’t need you/Every night we in the end zone/Tell the NFL we in stadiums too.”

Amy Shumer: Friday thought: I wonder why more white players aren’t kneeling. Once you witness the truly deep inequality and endless racism people of color face in our country, not to mention police brutality and murders. Why not kneel next to your brothers? Otherwise, how are you not complicit? I think it would be cool if @maroon5 backed out of Super Bowl like @badgalriri did. I personally told my reps I wouldn’t do a Super Bowl commercial this year. I know it must sound like a privilege ass sacrifice but it’s all I got. Hitting the NFL with the advertisers is the only way to really hurt them. I know opposing the NFL is like opposing the NRA. Very tough, but don’t you want to be proud of how you’re living? Stand up for your brothers and sisters of color. And the hottest thing a guy can do is to get down on one knee. Not to propose but to reject the treatment of his teammates by this country. Anyone who says it’s disrespectful to our military please read up on the fact that a lot of veterans are proud of what @kaepernick7 is doing and fully support him.

Colin Kaepernick: I can’t explain how much it means to have the support of the Icon Angela Davis! She has laid the foundation for [me] and many others to fight against anti-blackness, and has never wavered! We love and appreciate you!

Amber Tamblyn: Hi there. While you’re enjoying this mediocre Maroon 5 halftime please remember a football legend was blacklisted from this entire sport for merely putting his knee on the ground in protest of black people being murdered. Enjoy your pop music!

Common: “If you stick a knife in my back 9 inches and pull it out 6 inches, there’s no progress. If you pull it all the way out, that’s not progress. The progress is healing the wound that the blow made. They won’t even admit the knife is there.” Malcolm x.

Piper Perabo: I am in solidarity with @Kaepernick and the struggle for racial justice #ImWithKap.

Eddie Vedder: Vedder took a knee during his headlining set at the Tennessee Pilgrimage Festival. Earlier that day, his band Pearl Jam, tweeted their support for protesters: “We support…@Kaepernick7, and everyone’s constitutional right to stand up, sit down or #takeaknee for equality.”

Stevie Wonder: Tonight I’m taking a knee for America. Not just one knee, but I’m taking both knees. Both knees in prayer for our planet, our future, leaders of our world and our globe. Amen.

Other supporters who wear the #ImWithKap jersey or who have kneeled to show support for the cause: Jalen Brown, Boston Celtics; Steph Curry, Golden State Warriors, and Stevie Wonder with Dave Matthews and the great Civil Rights activist, singer and actor, Harry Belafonte.

The truth is out there. X-Files “Scully and Mulder” kneel in support of people like me. Thank you. And I loved your show, by the way.

How To Be Born Black, Run From Police And Live To Write About It
September 12, 2020
Go to Top