You are here:
sports 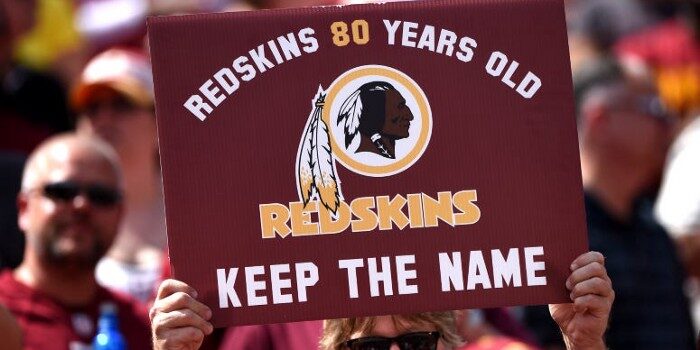 To read Part I of this series, click on the link below.

CULTURAL MANIFEST DESTINY AND ELIMINATING THE CONFEDERATE SYMBOLS OF PAIN

Here is the section of my forthcoming book on the specific matter of Native Team names and why both Black and White athletes have accepted this. Black Lives Matter lobbies for the voices of the unheard. We need to listen to Native voices.

Teams choose mascot names to promote their brand and to bring forth an image. Teams decide on a name that can celebrate their local heritage or customs or nearby animal — like Bears, and Pelicans and Dolphins and Trailblazers. The Forty Niners are named after the many people who flowed into California in 1849 seeking gold. I think the Oakland Raiders, across the Bay, were named to represent the swashbucklers who would steal that gold.

Teams can choose racist names, also. Awful names that mock Native American life and culture. Names that many interpret as derogatory and offensive and hurtful. We should consider diverse views of the past when we choose names (or who/what to put up as monuments).

The NFL football team from Washington chose a name that offends a huge section of our native population in the USA. Washington ownership — and many vociferous fans — have been non-apologetic.

In fact, Washington has always doubled-down on the name and dug trenches of resistance rather than stepping up, like Stanford University and the University of Miami-Ohio and others have done by saying: “Well, if this is in anyway offensive to millions of people, we now are smart enough — and socially conscious enough — to change.” (1)

Instead, Washington — via its owner — seemed to say, “This is our history — our tradition — and you simply don’t understand. This is Washington Red***** business. Stay out of it.”

Well, I do understand. I see this behavior all the time. I live in California, and I’ve noticed a trend here:

This pattern of killing animals, trees and other fauna and mockingly renaming the locale after the displaced is an ironic blind-spot Americans rarely notice. We buy into the belief that our nostalgia is saintly. We “honor” those whose ass we’ve kicked to claim the land — by renaming the place after the “kicked.” This “honorable naming,” of course, is ONLY meant to show “respect” to the vanished. But I think the naming includes an aspect of guilt.

The important issue of Native Americans and sports team names is vital to our cultural health as a nation. Though other teams need to check themselves, namely Cleveland and Atlanta, I’d like to put Washington on blast. The team in our nation’s capital should have been ashamed of themselves. As Dave Kirin notes in his book, What’s my name, fool?, “In the old days, trappers would kill a Native American, slice some bloody skin off the top of his head, then put a ‘redskin’ in their pouch with the deerskin, bearskin, and other nonhuman skins.” (2)

But team ownership, and their fans who bury their hog heads in the sand, have no shame. And they have zero respect for Native American culture. Yes, I said it, zero. We are laughing in Native faces, what with repeated stealing of land, culture and dignity. (They’ve fought back, like New Zealand Maori.) We are all guilty of looking the other way at that crime, truth be told. And we are all the beneficiaries of those crimes. Black folks, included.

There is no way to justify the use of that football team’s name that does not include a hard slap in the face of Native Americans, along with a scream that: “We don’t care what you think about our use of this obviously racist name — we don’t respect you anyway. You are dead to us.”

I further don’t know what to think about African Americans who play for Washington and look the other way, as if the only issue they need to be concerned with is a paycheck. I know, “Don’t hate the player, hate the game.”

I am guilty of looking the other way, too.

I worked in Corporate PR from 1983–1989 when Hewlett-Packard Company did business in South Africa. Nelson Mandela was still in jail and apartheid segregation brutally ruled the land. “HP has good justifications for being there,” we chimed in public relations. Many South African Blacks loved us being there, also. Well, at least those Blacks who worked in our sales office. Easier to agree with bad behavior when you benefit directly.

I got a sweet paycheck from HP Headquarters in Palo Alto every two weeks. I kept my head down and drank the corporate Kool-Aid. Wasn’t difficult because I loved HP.

I’m putting myself on blast as guilty of doing exactly what you are doing, black players who look the other way from racist mascots.

But I do recall the stance African American athletes took when Arizona refused to institute a holiday for Martin Luther King. You took a stance. And the NFL listened. They cancelled the Super Bowl in Arizona. And Arizona, suddenly, decided an MLK day was — surprise! — a good idea. And the Superbowl came back to Phoenix. You have more power than you think, professional athletes. Good to see so many more female and male athletes stepping up to speak truth to power.

The Washington Wizards used to be the Washington Bullets. Locals saw the irony of having a warhead of death as the main symbol of a city riddled by murder. Change can help remove some of the pain — and all of the irony. The name change was welcomed.

There are African Americans who’ve starred in Washington that are beacons of light, like Hall of Fame receiver Art Monk and Hall of Fame cornerback Darrell Green. “[If] Native Americans feel like Redskins or the Chiefs or [another] name is offensive to them, then who are we to say to them ‘No, it’s not’?” said Monk. Green adds, “It deserves and warrants conversation because somebody is saying, ‘Hey, this offends me.’” (3)

Think of “Redskins” like you think of the word “Nigger”

I lived in New Zealand as a professor from 1996–2009. I had a short, enlightening conversation about racial respect one night. I met a White guy from Los Angeles waiting in line at the latest hip Christchurch nightclub (occasionally they let professors in). He kept saying, “Nigga” this and “Nigga” that. I said, “I feel very uncomfortable with you using that word so comfortably around me.”

He said, “Ain’t no thang. I got a bunch of Black friends in L.A. and we use ‘Nigga’ all the time with each other. I respect black people.” I told him, “If you respected black people, then you would listen to the black person standing in front of you in line and not use that word. Else, your ‘respect’ is just lip service.” I wasn’t mad or angry or in fight-mode. I was reasonable. He stopped talking. He listened. Then said, “You are right. I’m sorry.” We were cool after that.

This racist and disrespectful symbol changed because the NFL and Washington listened. As change happens, my PR history tells me this will be the NFL/Washington response: “This change was a long time coming. We see how this name has wounded many people. We are doing our part to be a positive symbol in our nation’s capital. We welcome a chance to embrace the new era of the ‘Washington Redtails’ [or whatever]. Now get out there and buy our new jersey!”

Until then, all I see when I see “Red” next to “Skins,” is the spilled red blood of our forefathers and foremothers, Native Americans. Grant Native Americans statue or totem space on the National Mall for the heroes of their choosing if you want to honor their past. That’s respect.

[Note: I am ecstatic the name will be changed now. And the name “Redtails” would honor the brave souls who flew for the USA in WW II. That is the respect owed to us from our nation’s capital team. There are a couple still alive who could attend. In this way you honor those both alive and dead and do it with our blessing.]

Act Like You’ve Been There Before: The Age-Old White Taunt of White Privilege
September 12, 2020

The Ripple Effect of Colin Kaepernick Within and Beyond the NFL
September 12, 2020

Reflecting on Gender: Why the USA Women’s Soccer Team Should Celebrate Their Own Way
July 8, 2019
Go to Top